You are at : Home » NEWS & NEWSBRIEFS » Damage at Fowler Grindstone Preserve

The Land Alliance is concerned about the damage done within its Fowler Grindstone Preserve at Pendleton Hill Brook, where it crosses Grindstone Hill Rd.

The “Closed To Public” sign was placed when DEEP informed us there had been abnormal readings as shown by their Federal scientific instruments at their flow monitoring station on Grindstone Hill Rd.

After being told about the intrusion by U.S.G.S., we discovered it to include squatting, with the embankments on both sides being clear-cut, two rock dams were built in the streambed, trails were cut, a bridge was built and benches and signs were installed.

The destruction of this habitat affects the quality of the water and all things living in it.

We invite the public to enjoy our Fowler Grindstone Preserve on the official trails which they can access at two places along Fowler Road. 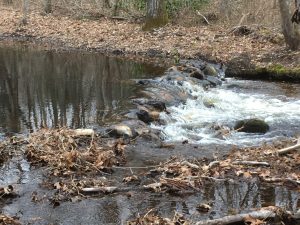 Rock dam since dismantled by U.S.G.S. 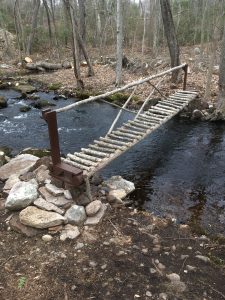 Hazardous bridge to be removed soon. 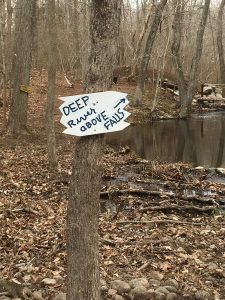 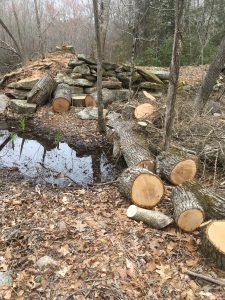 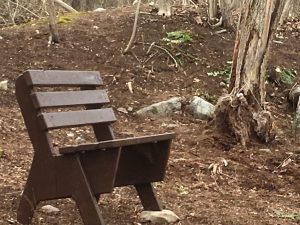 Note the lack of shrubs, and leaf matter that was cleared away. 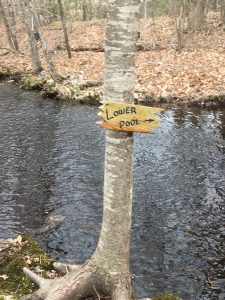 Water pooled up by rock dam which has since been removed by the U.S.G.S., a Federal agency of the Department of Interior.